WSU Prosser IAREC is currently closed to the public.  We can be reached via phone, email or webconference.  Please see our contact page.

Up to date information and resources can be found at wsu.edu/covid-19/. 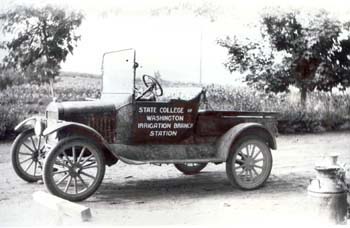 Prior to the start of the 20th century, sage brush and bunch grass along with other drought-tolerant, albeit commercially unviable, plants prevailed in the Yakima Valley when Washington State University (WSU) placed its signature on 200 acres of desert north of the city of Prosser. At the time, using “piped-in” water to grow crops was not yet established, as even the most experienced farmers struggled to master the intricacies of irrigated agriculture.

The Washington State legislature established the Irrigation Branch Experimental Station, in 1917 because of such challenges; however, there was no funding until 1919.  Later renamed the Irrigated Agriculture Research and Extension Center (IAREC), it was to assist the state’s then fledging agriculture industry. The first researchers who came to work in this arid environment faced many challenges. The soil lacked such basic nutrients as zinc and nitrogen. Daylong dust storms blanketed crops and topsoil. Weeds not only aggressively competed with newly planted crops, but choked irrigation canals that delivered the region’s most vital resource – water.

Today, nearly 100 years later, cooperative research among WSU, USDA-ARS, and WSDA conducted at Prosser IAREC is still pioneering unique and innovative developments in irrigated agriculture. Farmers have taken advantage of the results of this work and transformed the arid basin of the southeastern part of Washington State into one of the most fertile and productive regions in the world. The state’s economy benefits from more than $3,000,000,000 of annual revenue generated by more than 60 irrigated crops.